In 1831 Texas was still owned by Mexico. Floods of Americans were settling in Texas and they were campaigning to be an official state of Mexico. Many of them were fleeing from problems they had in the United States or just looking for a fresh start after a run of bad luck. Some of the first settlers created the village of Gonzales, Texas. The small village was being frequently attacked by Indians and the residents asked the government for a cannon to protect themselves. They were provided with a cannon by the Mexican government. As more settlers arrived and government leadership changed the relationship between the settlers and the government soured.

Tensions got very high and the Mexican government decided to take back the cannon from the citizens of Gonzales. The 18 citizens available when the military arrived negotiated for a couple more days to comply with the request. The 100 Mexican dragoons tasked with collecting the cannon made camp only a short distance from town. Gonzales used the negotiated time to rally militia from neighboring towns and prepare to defend the cannon. The citizens also traced around the cannon and made a flag that bore an image of a cannon above the words “COME AND TAKE IT.” It was a daring threat and the battle of Gonzales was the first of the war that led to Texas winning independence from Mexico. The courage of the Texians (Yes, that is the correct term) was incredible and the likelihood of their winning independence was probably smaller than that of the American Revolution.

The Texians were led to victory by one of the most interesting characters in American history, Sam Houston. When Sam Houston arrived in Texas in 1832 he was like many of the other settlers, on a run of bad luck, looking for a fresh start. Houston had left his family at 16 to live with the Cherokee Indians. He had fought and been injured in the Battle of Horseshoe Bend. He had been elected to the United States House of Representatives in Tennessee. He had also been elected the Governor of Tennessee. His run of bad luck included a failed marriage, resigning from his position of Governor, allegations of fraud, and being convicted by congress of beating a congressman with a cane.

In Texas Sam Houston embraced the call for independence and his military experience was desperately needed. He quickly rose to lead the entire Texian army. He employed many of the same tactics as George Washington in avoiding any major confrontations unless all the elements were in his favor. In the Battle of San Jacinto the Texians won the war and in the aftermath captured the President of Mexico, Santa Anna. In the battle Houston’s horse was shot out from under him and his ankle was shattered by a stray bullet.

As the hero of the war The Republic of Texas elected Sam Houston as their first President. The independent nation of Texas stood for less than ten years before Houston and President Polk convinced others to annex Texas into the United States. Later Houston was elected Governor of Texas. He is the only man to serve as the governor of two states. Today the city of Houston, named in his honor, is the fourth most populated state in the nation.

Our students need to know they can recover from a string of bad luck and that good luck follows those that work hard. The courage of Gonzales and the resilience of Sam Houston are great lessons for every student. Thank you for being courageous and resilient examples for our students.

Have a great Week 8,

If you want a book to give you a good background of Texas state history try Sam Houston and the Alamo Avengers by Brian Kilmeade. (It doesn’t tell you which words are not swear words in Texas, you just have to take Susan’s word for it) 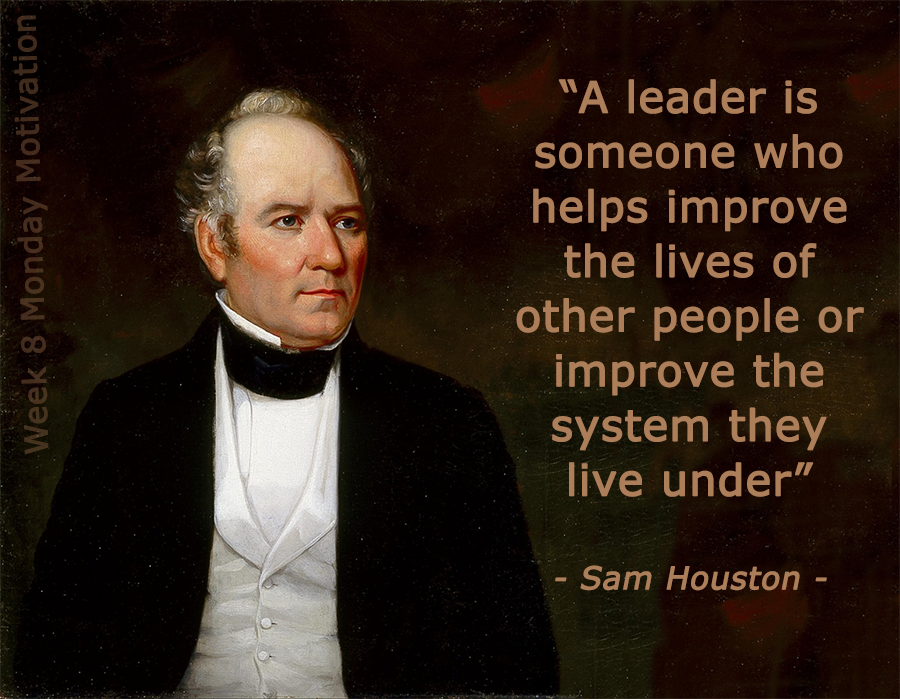