March marks one year from the time the world turned upside down with COVID-19. As wild as it has been in the education industry, it was more so in other industries. Unemployment peaked in April last year at 14.6%. As a comparison the highest point of the great recession was 10% unemployment. It’s always a good time to be grateful for what we have. Today I want to tell a story about a man that was well acquainted with unemployment.

He was born in Indiana and his father died when he was just five years old. At a young age he picked up jobs to help with some family expenses. He got jobs and he lost jobs. He married young and he divorced young. He tried being a train conductor but that job didn’t work out. He tried enlisting in the army, but that was a short lived dream as well. He tried selling insurance, but quickly moved on from that. He had dropped out of school, but thought he could go back. He applied for law school, but his application was declined.

Next he participated in starting a ferryboat business. The business did well enough that he sold his shares to start a business manufacturing lamps. That business completely failed and he was back home. He tried selling tires and decided that wasn’t his place either.

Shortly later he had the opportunity to manage a Shell station. When a sign was repainted to direct traffic to his station a competitor was angry. The tension led to a shootout where a Shell station employee was killed. The incident brought lots of attention and, without a competitor, his business grew. He soon acquired his own restaurant and motel. Not long after the restaurant and the hotel burned down.

Still not beaten he rebuilt the hotel and restaurant. He couldn’t hide from his bad luck though. World War II changed everything and he was forced to close his business. He went back to odd jobs as a cafeteria worker. At 65 years old he had nothing but $105/month from social security. He began writing his will, believing he was a failure and that he would take his own life. As he sat under a tree writing he reflected on what had been successful in his life. His years in the food industry had taught him how to make great chicken. He committed himself to make his chicken a franchise.

After visiting over 1,000 restaurants, sleeping in his car, he found one to take his deal and sell his chicken. Within 5 years “Kentucky Fried Chicken” was all over the United States. Even before his chicken had received the brilliant brand name it was famous. His Shell station chicken had led the Governor of Kentucky to commission him as a Kentucky Colonel. The last 20 years of his life he lived his brand. He was never seen without his white suit. When he died the State of Kentucky allowed him, Colonel Harland David Sanders, to lay in state at the capitol building in his white suit and black string tie. Today there are over 24,000 KFC restaurants in 145 countries.

Sometimes our students get behind, have bad luck, or make mistakes. They still have an entire lifetime of opportunities to keep trying. At 65 years old Colonel Sanders was just getting started. It may take over 1,000 failures, but every failure brings them closer to the next success. Thank you for being the cheerleaders they need to keep trying. 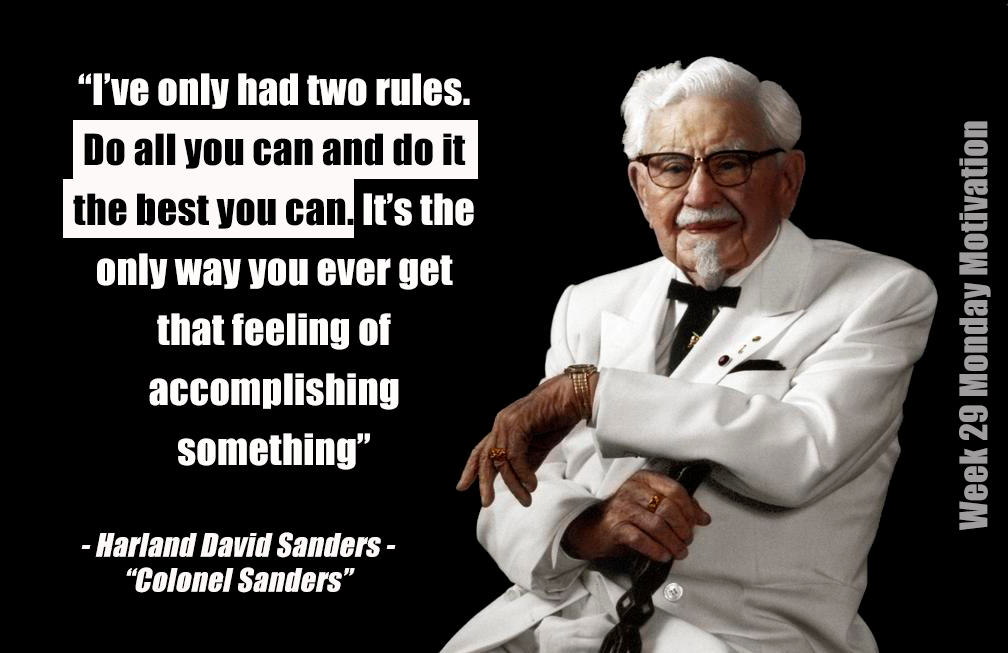