President Roosevelt is who I think of when I hear a reference to a Dos Equis Beer commercial. I think Roosevelt was actually “the most interesting man in the world.” His two most common nicknames might start the explanation. He was called “Teddy” in referencing the friendly, good-humored, and fun-loving man he was. He was also called “Bull Moose” for how tough and rugged he could be. A man of compassion and love and a man of war and adventure.

He did everything. He had most likely seen more of planet earth before he was 18 than all of Piute County School District put together in our lifetimes. He fought in wars, Governed the bustling state of New York, and ranched the prairies of the black hills of the Dakotas. He wined and dined with the world’s wealthiest men in the nicest cities and fought with his hands against the lowliest drunks of the wild west. He lost his mother and first wife to death on the same night and in the same home. His ability to overcome adversity and improve himself is inspiring.

Once Theodore Roosevelt was working cows at his ranch in the Dakotas. A cow that was not his had gotten mixed with his cows. One of his best ranch hands went to brand the cow anyway. Roosevelt fired the man on the spot and said “A man who will steal for me will steal from me.”

Another time Roosevelt took it upon himself to hunt down and bring to justice a group of boat thieves. The group stole his (very inexpensive) ranch boat in the badlands and took off down the river. Roosevelt took three days to personally build another boat himself for which to hunt them down. Roosevelt was perhaps one of the world’s most skilled hunters. In the bitter cold Dakotas he caught up to the men and took the three of them prisoner. He knew who the men were and knew that based on their other crimes and the law of the day that he could simply shoot them and collect his boat. Instead he chose to march the prisoners miles on foot for 8 days to the nearest sheriff. It was an amazing feat. He feared tying the men up would cause them to die of frostbite in the night. They undoubtedly looked eagerly for a moment to overpower him and escape. For many nights he had little food and no sleep watching his prisoners. He staggered into the town of Dickenson bloody and sore to gladly hand the men over to the law. He was compensated some fifty dollars for his trouble as a deputy sheriff.

You start to get the idea of how he was both “Teddy” and “Bull Moose'' simultaneously. Here’s another example. As Vice-President he became President of the United States when President McKinley was assassinated. He finished that term and then was elected to a full term himself. He allowed President Taft to win the Repulican ticket for the 1908 election. After a term with Taft as the President he decided he wanted to do it again. He began campaigning as a progressive in a three party race in the 1912 election. Once he was scheduled to speak at a hotel. As he waved to the crowd outside a man stepped forward and shot him in the chest at close range. Roosevelt stubbled, but did not fall. The bullet went through his clothes, through a metal container holding his glasses, through a 50 page collection of notes for his speech, and through his skin. The bullet was not able to penetrate his lungs. His crowd turned into a mob and prepared to lynch the man who dared shoot Roosevelt. Roosevelt quickly calmed the crowd and took pity on his attacker. He asked the man why he had attacked him and with no response turned him over to the law referring to him as a “poor creature.” Roosevelt refused to see a doctor until after he had given his speech. As he spoke blood stained his chest. In his speech he recounted the attack and stated that “it takes more than that to kill a bull moose.” The bullet was never removed from Roosevelt’s chest.

These stories are told much better by David McCullough in his book Mornings on Horseback: The Story of an Extraordinary Family, a Vanished Way of Life and the Unique Child Who Became Theodore Roosevelt. 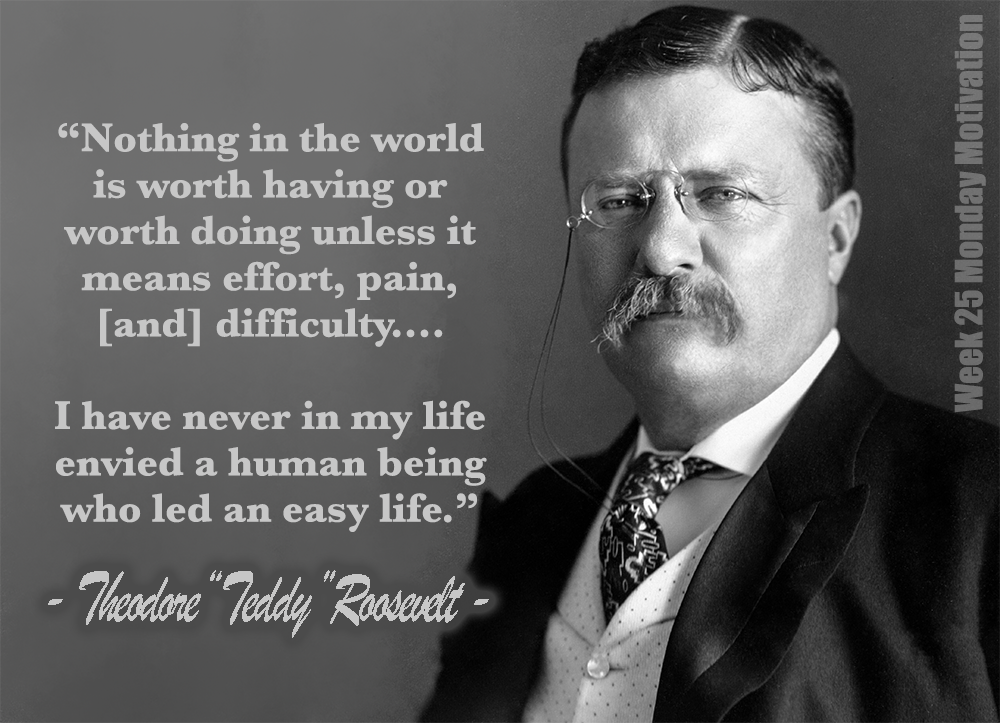