Stephen Decatur was an american hero that we don’t hear as much about today. His heroics were on greatest display in the barbary wars during the early years of the United States. There are several inspiring stories of his life, but my favorite involves the burning of the USS Philadelphia. Decatur was serving in the young United States Navy in 1804. He was on an assignment to reclaim the USS Philadelphia off the coast of the African country called Tripoli. Tripoli was one of the barbary nations American was at war with at the time. The barbary nations looted and pillaged American trade ships to such a great degree that war was necessary.

The USS Philadelphia had been captured and it’s crew enslaved. It was anchored off shore in the enemy harbour of Tripoli. The ship was easily in range of the large shoreline fortress and the heavy cannons of the city. Decatur was to lead a group of marines in disguise as maltese sailors into the harbor and recapture the American ship. The ship had been badly damaged during its capture and the Americans knew it might not be fit to sail into the open sea. Decatur had instructions to recapture the ship and then either sail the ship out of harbor or burn it down. Burning it would prevent Tripoli from using the large and impressive frigate against them.

You can imagine the scene much like a Hollywood movie. It was just getting dark when the Tripoli soldiers on the USS Philadelphia spotted what appeared to be a British merchant ship approaching the harbour. Decatur and his small band hid below deck and allowed a few africian volunteers to steer the disguised ship on the deck. As they got close to the USS Philadelphia, one of Decatur's africian volunteers called out in aribic that they had lost their anchor at sea and needed a place to tie up to repair their ship. Shortly after the disguised Americans tied to the USS Philadelphia, Decatur gave the order “board”. They were to take the ship without firing a shot or alerting the fortress on the shore. They scaled the side of the ship and killed or scattered the dozens of Tripoli soldiers protecting the ship.

As soon as citizens on the shore of Tripoli began to suspect something was going on, large American frigates began firing cannonballs on the city as a distraction. Decatur had only a short time to determine whether or not the ship was seaworthy. He determined it was not. In planned teams his crew started fires around the massive ship. They quickly boarded their small merchant ship with Decatur himself being the last to leave the USS Philadelphia. As they pulled away they were subject to the return fire of the shoreline. The massive fire lit up the harbour and exposed their small ship. To their advantage, the fire on the ship caused the many loaded cannons and barrels of gunpowder to explode, raining shrapnel down on the city and fortress. The crew of the USS Philadelphia sat in prison cells in the city listening to the commotion and hoping it meant good things for America. Unfortunately they were still over a year from being rescued.

Decatur rejoined the other American ships and celebrated the victory. With only a small band of marines he had overpowered the dozens of guards and escaped the firepower of the shoreline without losing a single soldier. When one notorious British Admiral heard the story he called it “the most bold and daring act of the age.”

Cities, towns, and streets are not often named after great educators, but their influence carries longer. Educators influence so many and so deeply that their influence carries for generations. Perhaps there are fewer action movie scenes working in Education, but there are more opportunities to impact the future and make positive change. Thanks for boldly leading your students through to the last month of a very unique school year.

Be bold and daring in Week 36,

The first land attack of the United States on foreign soil was in Tripoli. Thus the marines hymn starts with “From the halls of Montezuma, To the shores of Tripoli” 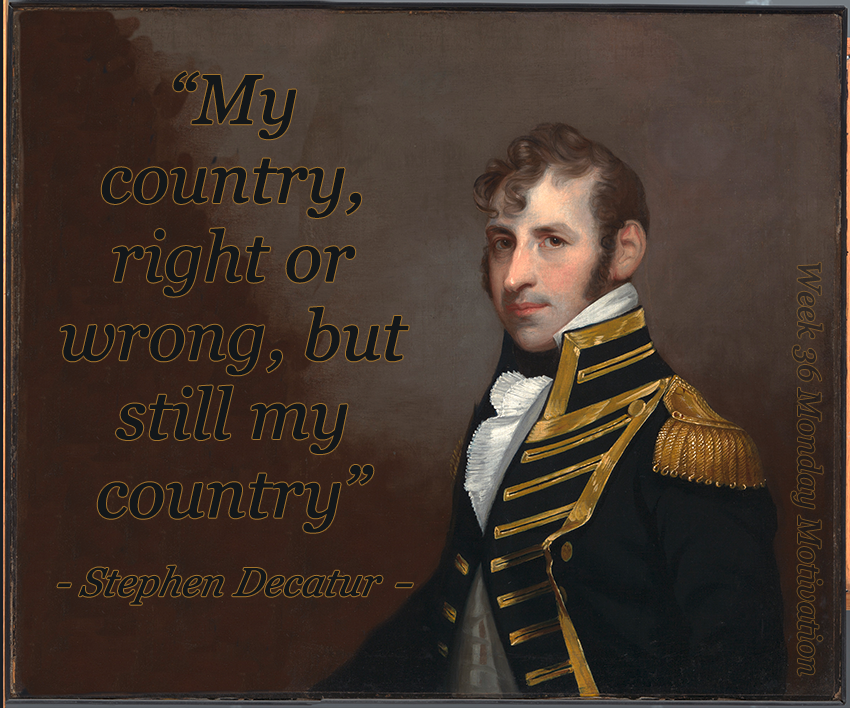